The Rebuild General Practice campaign comes at a time of ‘crisis’ when appointment numbers are peaking post-pandemic, while GP workforce numbers are on the decline.

Campaign leads will raise patient safety concerns and set out a 3-point plan for a General Practice rebuild. This must include:

Your support to amplify these messages will help raise the alarm and ultimately secure a better working environment for both GPs and patients.

General Practice can like and share the @RebuildGP campaign messages on social media using the hashtag #RebuildGP.

Draft letter template to send to your local MP 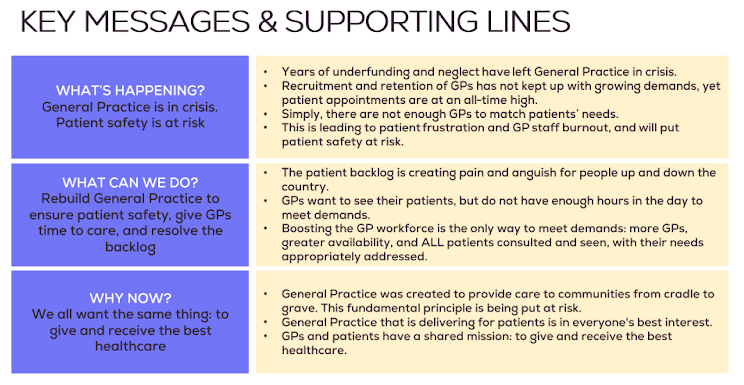 Campaign assets for General Practice use

'Uberisation' of GP services is putting patients at risk, Jeremy Hunt warns as he calls for patients to always be seen by same family doctor

Over 80% of UK GPs think patients are at risk in their surgery, survey finds

Public satisfaction with the NHS has fallen to its lowest level since 1997, according to analysis of the 2021 British Social Attitudes survey (BSA) published 30th March 2022, by The King’s Fund and the Nuffield Trust. Read more here

Dr Rachel Ward, a GP in Oxfordshire who is part of the Rebuild General Practice campaign: “As a doctor who came into General Practice to look after patients, this data is devastating, but it isn’t surprising. Years of underfunding and neglect has left General Practice in crisis. Recruitment and retention of GPs has not kept up with growing demands, yet patient appointments are at an all-time high. Simply, there are not enough GPs to match patients’ needs - and this is the terrible result. To patients, we want to say that we are on your side and we feel your pain. To Government, we ask again for more support to rebuild general practice so that GPs can provide the quality of care our patients deserve.”

This page appears in...

Add to my Learning Diary